Tucker: Let them use knives

Good news: after a decades-long search by a blue-ribbon commission of internationally renowned experts from McKinsey & Company and Yale Law School, the Democratic Party announced that it has finally identified the single most grotesque, most dystopian, most anti-human policy ever adopted by a Western government. They’ve been looking hard to find it, as you may have noticed.

At a triumphant press conference Wednesday, leading Democrats unveiled their findings, which are now a plank in the party’s platform: they’re going to allow children to stab each other.

Stabbing people has long been taboo in this country, especially for those under 18. For decades, young Americans have hidden their switchblades, their stilettos, their K-Bars and machetes. Kids were forced to live as if plunging blades into strangers was something to be ashamed of instead of a normal, heathy part of childhood. No more. Knife fights are human rights. Stabbing can finally come out of the closet.

In some ways, it’s a return to the future. The right to stab has been restored to the pantheon of freedoms our Mayan ancestors enumerated thousands of years ago in our founding document, The Declaration of Diversity. Going forward, allowing children to stab others will be enshrined in law alongside America’s other core foundational rights: the right to commit voter fraud, the right to free body piercings, the right of trans illegal aliens with pituitary disorders to become fighter pilots. These are the very rights upon which this nation was founded — the rights the Democratic Party exists to protect.

Now, not everyone embraced this news. Some called it a form of child sacrifice. Of course they did. As Kamala Harris often points out, bigots hate progress. They want to take this country back to the Dark Ages, a time when America’s residential neighborhoods were safe and people liked each other. But there’s no going back.

On Tuesday, some Neanderthal in Columbus, Ohio — a racist, probably — called 911 to complain about an attempted stabbing — which at the time, if you can believe it, was considered a bad thing. On the call, she said, “These girls over here trying to fight us, trying to stab us, put their hands on us, get our grandma. Get over here now … We need a police officer here now.”

If your first thought upon hearing “someone’s trying to stab us and get our grandma. We need a police officer here now.” was, “Calm down, racist. Stabbing people is an important part of childhood development,” give yourself an equity ribbon. There may be a job for you in MSNBC prime time. A stabbing? What’s the harm there? That was our thought. Then we saw clearer tape of what happened next, and we’ll concede for a moment we wondered if allowing kids to kill people with knives was really the enlightened idea they told us it was.

You’ve probably seen the video, so you decide. A teenager called Ma’Khia Bryant was seconds away from plunging that knife into someone else when the police arrived. It doesn’t matter who you voted for or what your views of modern America are, you don’t need to guess what was happening when you watch the video. 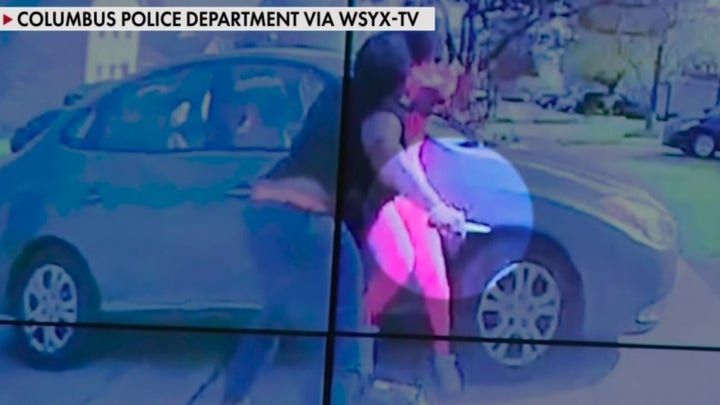 If you listen carefully, you can hear someone say it on the tape: “I’m gonna stab the f— out of you.” There’s no question that she was going to do that. Her hand was in the air. The knife was heading into the down stroke. The other girl was just an instant from being stabbed. If the cop wanted to save that girl, he had to shoot. So he did. We’re not crime scene investigators, but that was our conclusion after watching the video several times.

Kiara Yakita of the Black Liberation Movement of Central Ohio had a different take, and, honestly, it’s possible that she has more experience with these things. As she told The Washington Post: “As soon as the officer got out of the car, he had the gun ready to shoot somebody. Law enforcement and city officials are rushing to make excuses because she had a knife. Those excuses are not valid to me.”

So know this, America: those excuses are not valid to Kiara Yakita, or indeed to the entire Black Liberation Movement of Central Ohio — those “excuses” being one person stabbing another person to death in front of the police. Kiara Yakita knows exactly how an able police department would handle situations like that. It’s not hard. You just become Bruce Lee in the 1971 film “The Big Boss.”

If Bruce Lee can do it in one of his finest feature films, there’s no reason that police officers in Columbus, Ohio can’t do the same thing. Yes, there was an attempted murder in progress. That’s common in kung fu movies. But it doesn’t mean you need to use firearms. Using a gun to save a life isn’t affirming. It’s not equity, even if the girl the cop saved was also African-American. If that police officer had read Ibram X. Kendi, if he’d been trained in the principles of anti-racism, he would have produced a pair of soft foam nunchucks and disarmed the assailant — or else just let the other girl get stabbed.

COLUMBUS OFFIDER WHO FATALLY SHOT TEEN GIRL AS SHE LUNGED WITH KNIFE IS 23 YEARS OLD, ON FORCE FOR 16 MONTHS

Someday soon, Merrick Garland’s Justice department will likely send down a consent decree mandating just that, we have no doubt. In the meantime, MSNBC pointed out, we know for a fact that the cop was a racist, because he didn’t even bother to ask Ma’Khia Bryant what her grade point average was, or whether she had a popular TikTok account, if you can even imagine.

JASON JOHNSON: Ma’Khia Bryant, a 16-year-old girl in Columbus, Ohio called the police for help. An officer was on the scene. And in twenty-two seconds, he shot her dead. An honor roll student who was making TikTok videos on makeup and hair. This hasn’t stopped … And still, 40 minutes after that [Derek Chauvin] ruling, a 16-year-old girl can be shot in front of her house. So no, I’m not hopeful. Because unless there is wholesale, wholesale change, abolishment of this institution that continues to fail tax-paying black people in this country, everything else is just fanciful thinking.

Who’s that guy, and what does he know? That’s Jason Johnson of MSNBC. He’s an accredited scholar. He teaches communication at Morgan State University in Baltimore. Professor Johnson has concluded that if kids can’t continue to stab people in their own driveways, then we’re going to have to abolish the police. Any institution that won’t allow child stabbings doesn’t deserve to exist.

The ACLU affirmed this. “We’ll say it again,” the former civil liberties organization declared on Twitter, “a system that kills children with impunity cannot be reformed.”

‘THE VIEW’ PUSHES BACK AGAINST CNN’S DON LEMON OVER MA’KHIA BRYANT SHOOTING: HE’S ‘WRONG ABOUT THIS’

You know who nodded as she read that? Bree Newsome. Newsome doesn’t work at the ACLU, and she’s not some fancy academic genius like Jason Johnson. She’s a full-time BLM protestor — a child of the rough-and-tumble, a poet of the streets, who also happened at one point to study film at NYU’s Tisch School of the Arts.

According to Bree Newsome, “Teenagers have been having fights, including fights involving knives, for eons,” meaning a very long time. “We do not need police to address these situations by showing up to the scene and using a weapon against one of the teenagers.” 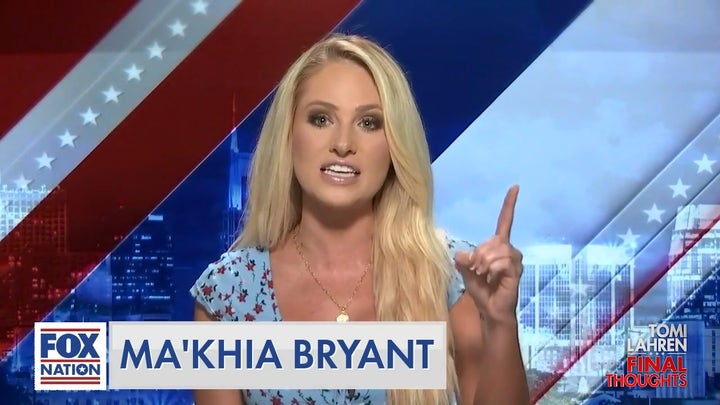 Right. Just because someone’s getting stabbed doesn’t mean you have to stop it, racist. Children have been stabbing their friends forever. Get over it. Let kids be kids. Let them stab each other. Let them stab! The guy who used to run the NAACP said that Wednesday on CNN.

CORNELL WILLIAM BROOKS, FORMER NAACP PRESIDENT & CEO: It is not wrong, it is in fact right for people to ask, is it appropriate? Was it the right thing? Was it a necessary thing for a police officer, within minutes, of pulling out his gun and firing four bullets into a teenager’s body? … What if it were your daughter? What if it were your child, what if it were a member of your family, your neighbor in a — essentially in a teenage fight, a schoolyard fight?

It was just a schoolyard fight, explains Cornell Brooks. You mean you didn’t go to a school like that, where kids were plunging blades into one another’s chests? Then you missed out.

COLUMBUS SHOOTING: OTHERS INVOLVED IN CONFRONTATION THAT LED TO TEEN’S DEATH WERE ALL ADULTS

Joy Reid, the race lady over at MSNBC, has lived what seems like an unusually privileged life. She grew up in Denver, the daughter of a professor, then went to Harvard, where she studied something called visual arts. So she’s a confirmed member of the top 1%. But even so, Joy Reid saw an awful lot of knife fights going to school. Because that’s just how schools are.

JOY REID: I remember fights in even high school or even younger than that where a kid brought a pen knife or something to school and teachers were able to defuse that and they didn’t have guns.

Yeah. You should have seen Brooks House at Harvard, it was just splattered with blood.

So, stabbing people isn’t a big deal, says Joy Reid. If you think it is — if you have a problem with kids committing violence on your street or in your school — the problem isn’t them. The problem is you. You’re the criminal. You’re a racist.

As the mayor of Columbus, a Democrat called Andrew Ginther, put it after the shooting: “How did we get here? This is a failure on the part of our community. Some are guilty, but all of us are responsible.”

But wait a second, you might be asking yourself. My kid didn’t try to stab anyone. In fact, my kid could have been stabbed. How am I responsible for any of this? I pay my taxes. I try to be a decent parent. I make an attempt to go to games, have family dinners. And now I’m “responsible” for attempted murder? How does that work, exactly? Why don’t you explain it to us, Mr. Mayor?

Well, it works by the magic of systemic racism. Systemic racism is the means by which you get blamed for things you had nothing to do with.

Joe Biden’s frowny little flak made that point immediately after this happened in Columbus. In response, she said, the White House will work “to address systemic racism and implicit bias head on.” Whose? Yours. Your racism, your bias. That’s what caused this.

Let them use knives! Or else.

This article is adapted from Tucker Carlson’s opening commentary on the April 22, 2021 edition of “Tucker Carlson Tonight”