CBS received widespread criticism for a ’60 minutes’ segment on Ron DeSantis, a ‘softball’ interview with Hunter Biden, and a since-deleted tweet compared to ‘liberal activism.’

CBS appears to have found protection from the intense backlash over Sunday’s controversial “60 Minutes” report on Florida Republican Gov. Ron DeSantis in the form of four of its closest competitors: CNN, MSNBC, ABC, and NBC.

DeSantis has accused the network of “lying” after the venerable newsmagazine ran a segment implicating him in a “pay-for-play” scheme which suggested he rewarded grocery store chain Publix with coronavirus vaccine distribution rights after the company made a $100,000 donation to his campaign.

As Florida Democrats have spoken out in defense of the prominent Republican and “60 Minutes” has been blasted for deceptively editing his remarks to correspondent Sharyn Alfonsi, none of the other networks have put a spotlight on the growing controversy, according to Grabien transcripts.

In fact, MSNBC hosts Ari Melber and Joy Reid as well as “The View” co-host Sunny Hostin perpetuated the “pay-for-play” narrative pushed by “60 Minutes” on their programs without noting the bipartisan backlash.

The only acknowledgment of the controversy from any of the networks is an online report by CNN putting a spotlight on CBS’ woes. 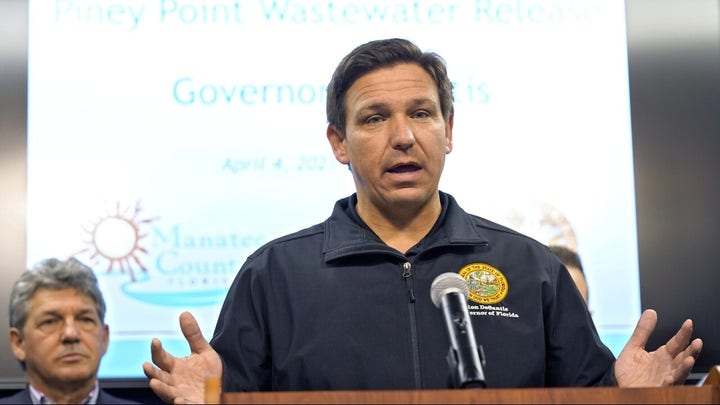 CBS News, however, has continued to defend its DeSantis report, releasing a new statement focusing on the racial disparities of vaccine distribution rather than the corruption claims.

“Last week’s 60 Minutes story was about the vaccine roll-out to seniors in Palm Beach County and focused on a lack of access for minority communities,” CBS began. “Governor DeSantis’ comments about this piece do not acknowledge that his senior constituents in the Glades did not have easy access to a Publix for the vaccine. The Glades is an underserved portion of Palm Beach County with a population of 31,000 that was the focus of the 60 Minutes report.”

The statement stressed that Publix was the “only” pharmacy in Palm Beach County to have access to the vaccine in January, when “the mostly Black and Hispanic senior residents of the Glades would need to drive 25 miles if they had a car or take a bus ride to the nearest pharmacy.” The statement added that many residents of the Glades “do not own a computer or a smartphone.”

CBS News dismissed the list of hospitals, health care facilities, faith-based centers, and pop-up sites DeSantis presented at a press conference Wednesday, insisting they were “not available to most seniors in Palm Beach County in January and part of February” and that a “majority” still have to rely on Publix to get the vaccine.

“The Governor referenced CVS and Walgreens, however vaccines did not reach those pharmacies in the Glades until late February for CVS and mid-March for Walgreens, well after the Governor began distributing the vaccine with Publix on Jan 21, 2021,” CBS News stated, alluding to the federal program that targeted long-term care communities. “For this reason, the Governor’s comments about CVS and Walgreens were not included in the original broadcast.”

The omission of DeSantis’ comments led to the allegations of deceptive editing in order to push the “pay-for-play” narrative.

DeSantis had explained to Alfonsi that Walgreens and CVS were focused on long-term care communities to vaccinate seniors while Publix “raised their hand” first to further implement the vaccine rollout.