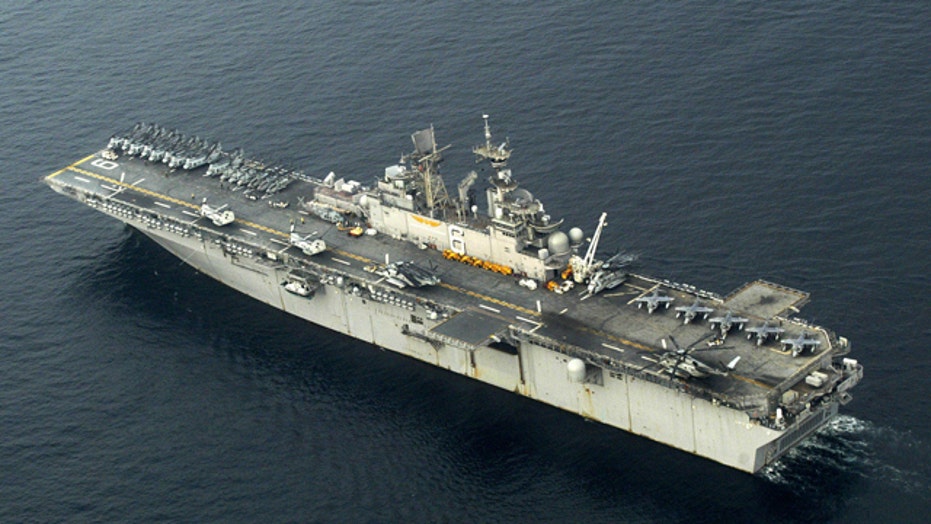 An explosion and fire broke out on the USS Bonhomme Richard at Naval Base San Diego, military officials said.

In a general sense, Navy amphibious assault ships such as the Wasp-class ships have often been referred to as the “Swiss Army Knives” of maritime combat; they can launch air-sea-surface amphibious assaults from ship to shore, transport Marines to combat and perform a wide range of humanitarian missions.

Of perhaps even greater importance, big-deck amphibs are fast-expanding their mission envelope given the addition of the F-35B stealth fighter and the fast-rise of air, sea and surface drones.

Many senior Marine Corps and Navy leaders are increasingly looking at using large amphibious assault ships as “mother ships” operating a large fleet of unmanned systems. This not only expands reach, attack scope and surveillance possibilities but also helps the Navy adapt to a new threat environment requiring the service to adapt its amphibious assault strategy and tactics. 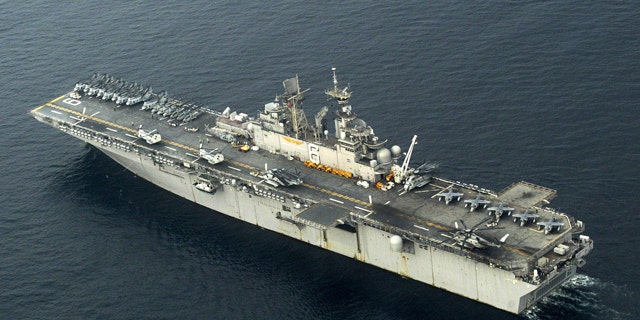 Jan. 4, 2005: FILE – In this file photo, the USS Bonhomme Richard (LHD 6) steams off the coast of Sumatra, Indonesia while conducting humanitarian assistance.
(AP)

Since potential adversaries now have longer-range weapons, better sensors, targeting technologies and computers with faster processing speeds, amphibious forces approaching an enemy’s shore may need to disperse in order to make it harder for enemy forces to target them.

Therefore, the notion of an air-powered, disaggregated, yet interwoven attack force, less vulnerable to enemy fire, could be launched to hit “multiple landing points” to exploit enemy defenses.

The success of an amphibious attack needs, or even requires, air supremacy. Extending this logic, an F-35 would be positioned to address enemy air-to-air and airborne air-to-surface threats such as drones, fighter jets or even incoming anti-ship missiles and ballistic missiles. The idea would be to use the F-35 in tandem with surveillance drones and other nodes to find and destroy land-based enemy defenses, clearing the way for a land assault.

These kinds of synchronized attack tactics would naturally be heavily fortified by the F-35. After all, the F-35’s Distributed Aperture System places 360-degrees worth of cameras around the aircraft and comes with a high-tech targeting sensor called EOTS, or Electro-Optical Targeting System. The aircraft’s computers also allow for something called “sensor fusion,” a technology that integrates information from a host of different sensors on-board a single screen for pilots to view.

Dispersed approaches, using air-ground coordination and forward-positioned surveillance nodes, can increasingly use synchronized assault tactics, pinpointing advantageous areas of attack. Not only can this exploit enemy weakness, but it also brings the advantage of avoiding more condensed or closely-configured approaches far more vulnerable to long-range enemy sensors and weapons.

Having an advanced airpower such as an F-35B, which can bring a heavier load of attack firepower, helps to bring assault forces across a wide range of attack locations.

None of this, while intended to destroy technologically sophisticated enemies, removes major risks. To be clear, Russian and Chinese weapons, including emerging fifth-generation fighters, DF-26 anti-ship missiles with alleged ranges of 900-miles and rapidly-emerging weapons such as drones, lasers and railguns are all concerns.

In effect, future “ship-to-shore” amphibious attacks will look nothing like the more linear, aggregated Iwo Jima assault. A Naval War College essay on this topic both predicts and reinforces this thinking.

“The basic requirements of amphibious assault, long held to be vital to success, may no longer be attainable. Unlike the Pacific landings of World War II amphibious objective areas could prove impossible to isolate,” the paper, called “Blitzkrieg From the Sea: Maneuver Warfare and Amphibious Operations,” states.

The essay, written in the 1980s during the height of the Cold War, seems to anticipate future threats from major-power adversaries. Interestingly, drawing from some elements of a Cold War mentality, the essay foreshadows current “great-power” competition strategy for the Navy as it transitions from more than a decade of counterinsurgency to a new threat environment.