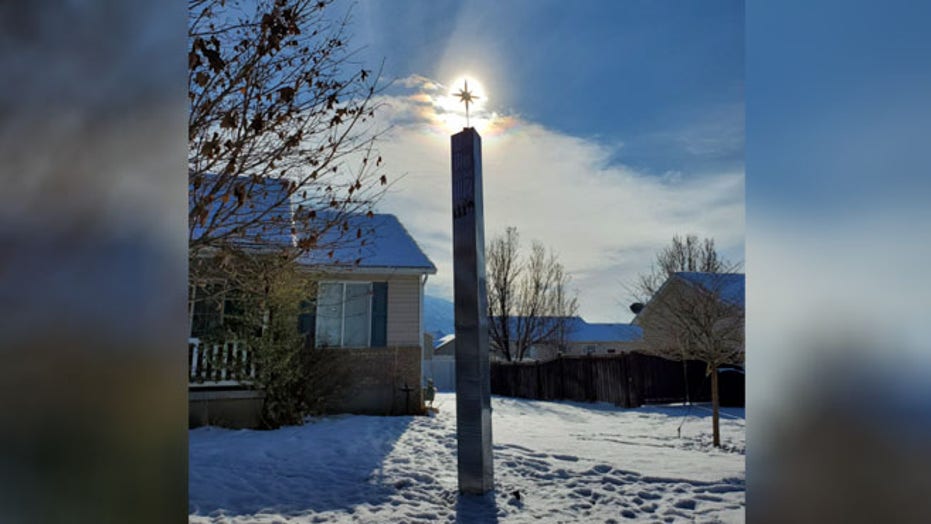 There’s no mystery behind this monolith – it was made to make people smile.

Following reports that mysterious monoliths have randomly appeared across the world, a man from Utah decided to build his own. Instead of seeking attention or fame, however, he was simply trying to cheer up his wife, who is battling cancer.

Since the monolith was unveiled in the family's yard in Payson, locals have started stopping by to check out the 17-foot structure and appreciate its positive message.

Wesley Peay told Fox News that the project was a productive distraction this Christmas season, in hopes of sharing "some smiles and hope" all around. The man said it took him and his son somewhere between 72 and 80 hours of work across nine days to build the structure in his yard, dig a hole into frozen ground and raise the monolith up.

Friends helped make the vinyl decals and Christmas star for the top, Peay said, explaining that it took some careful coordination to fix the whole thing into place.

"It’s so tall I cannot get to the top with normal-sized ladders, [so] we actually had to take it out once placed because we forgot to put the star on in," he said. "At one point my tough son ended up holding the entire weight on his shoulders as we shifted it around to do it right that time."

Peay is using the monolith’s popularity to promote a fundraiser that his family is running to raise money for his wife’s medical bills.

"Our soup fundraiser has been amazing," Peay said. "My wife enjoys coming out and delivering with me as we run around the valley and drop them off. It truly has saved us from a rather difficult time we were looking at with paying up some of these mounting bills and even managed to piece together a humble but decent Christmas for the kids."

"We all feel incredibly blessed to be part of it. Especially when we get the chance to reach out and help others going through their assorted trials. Saying it has been amazing may be an understatement to be completely honest."

"We are so appreciative of everyone's love and take every chance we can to also play our part and pay it forward. This has been the greatest holiday season to date for us because of it," Peay added.