Vice President Kamala Harris is facing criticism for appearing to break with precedent and failing to salute the honor guard when boarding Air Force Two.

Conservatives, including Turning Point USA’s Charlie Kirk and former NYPD Commissioner Bernard Kerik, slammed Harris after a video of her walking past the honor guard picked up steam on social media.

“DISGRACEFUL: @VP Kamala Harris refuses to salute the honor guard at the steps of the aircraft. It is a clear demonstration of her dislike for those in uniform, both law-enforcement and military,” Kerik wrote on Twitter.

Video reviewed by Fox News showed that Harris did not salute the honor guard on Monday nor during earlier trips on March 15 and 16. She did not appear to salute when disembarking Air Force One with Biden on March 19 either.

Recent vice presidents have maintained the practice of saluting the honor guard while entering and exiting Air Force Two.

Former Vice President Mike Pence can be seen saluting the honor guard members while deplaning during stops in Utah and Georgia last year.

Video from Biden’s two terms as vice president show him saluting members of the U.S. military as he exits Air Force Two, including during a 2013 trip to Beijing. 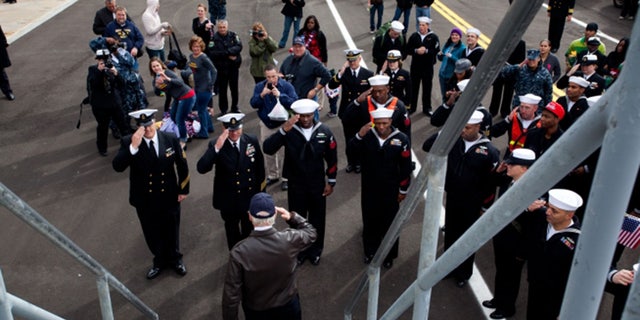 The tradition of saluting the Marines outside Air Force One began with former President Ronald Reagan, who served in the Army, according to The Florida Times-Union.

“I know all the rules about not saluting in civilian clothes and so forth, and when you should or shouldn’t,” Reagan said according to The Florida Times-Union. “So, I said to the commandant, I said, ‘Look, I know all the rules about saluting in civilian clothes and all, but if I am the commander in chief, there ought to be a regulation that would permit me to return a salute.’ And I heard some words of wisdom. He said, ‘I think if you did, no one would say anything.’”

Fox News’ inquiry to the White House was not returned at the time of publication.