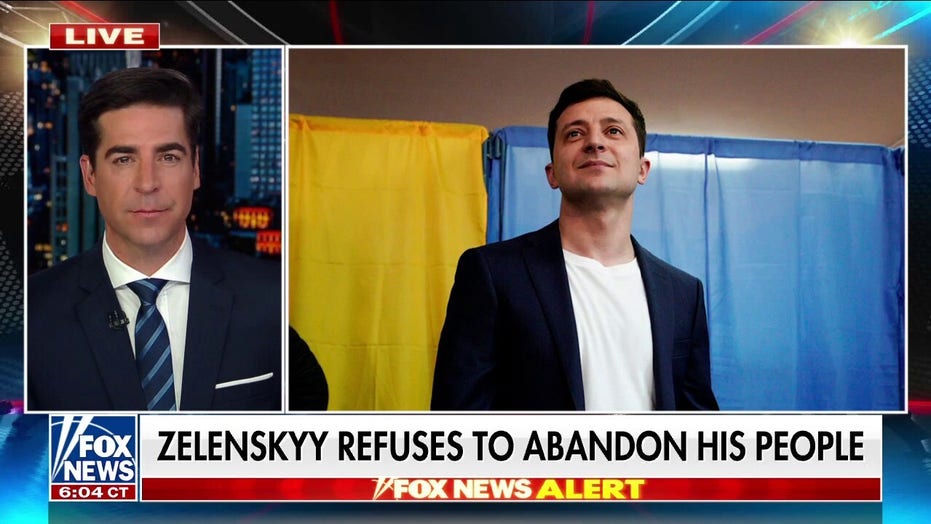 Watters: Zelenskyy has become the face of Ukraine’s resistance

“The protection of Zelenskyy is priority number one for the entire Western world,” he said. “He’s become a symbol larger than life. He recognizes this, and appears to know he may have to die in the capital to save his country.”

There is a “propaganda war” with Ukraine, he continued.

“It’s being fought on all sides, and Zelenskyy is the key character,” Watters said. “The West cannot lose him. The Ukrainians cannot lose him, and so the United States must help execute a survival strategy to keep Zelenskyy and hope alive.”

Watters deemed Zelenskyy “the white knight of Kyiv” to Ukraine, but “public enemy number one” to Russian President Vladimir Putin.

A Chechen hit squad was sent to assassinate Zelenksyy, but the group was “eliminated,” Watters reported.

“The longer Zelenskyy is alive, the worse it is for Putin and the better it is for Ukraine.”

“These are the actions of a terrorist, not the leader of a civilized nation,” he said.

The Fox News host called Zelenskyy a “fearless leader,” saying he “is having his Churchillian moment.”

“When the fighting began and the bombs started to fall, he could have fled to safety in the West, but he refused to abandon his people.”

The president’s importance to Ukrainians cannot be overstated, he added.

“The more intense the fighting gets, the more powerful his message of defiance becomes. Every day, the people are rallying around his words.”

The United States must help Ukraine and do anything it can to protect Zelenskyy, Watters said.