White evangelicals’ attitudes toward the coronavirus pandemic are considerably more relaxed than those of other religious groups, a new study said.

White evangelical Protestants were generally less worried about contracting COVID-19, more ready for life to return to normal and much more likely to say that President Donald Trump was handling the pandemic well, compared to Americans from other faith groups.

The results are part of an analysis prepared for HuffPost by the American Enterprise Institute, a conservative-leaning think tank, based on its “COVID-19 and American Life Survey.” That wide-ranging survey was conducted between May 21 and June 5, a period when daily confirmed new cases of the virus inched downwards in the U.S.

The virus’s trajectory has recently shifted, with health officials expressing alarm Friday about a surge in new cases across the South and West.

Daniel Cox, an AEI research fellow who authored the report, told HuffPost he thinks white evangelicals’ attitudes about the pandemic are unique and can partly be explained by the fact that many members of this religious group live in Southern states and in rural areas that were less hard hit by the virus initially.

“Given the pandemic is now sweeping through the Southern U.S., places where large numbers of white evangelical Protestants live, it will be interesting to see whether their attitudes and behaviors change,” Cox said. 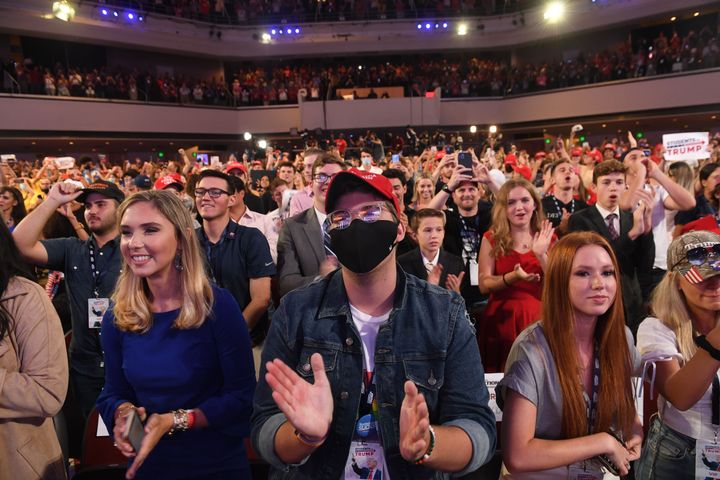 Only 42% of white evangelicals said they worried about the possibility that they or someone in their household might contract COVID-19, the analysis said. On the other hand, about 60% of all Americans surveyed expressed worry. Black Protestant responders were especially likely to worry about getting infected (69%), which makes sense given that the virus has been particularly deadly for communities of color.

White evangelicals were more likely than other religious groups to say that the government should allow businesses to open back up ― even if it means putting some people at risk (65%). Majorities of white mainline Protestants and white Catholics agreed (52%).

In contrast, most Black Protestants (84%), Hispanic Catholics (70%), members of major non-Christian religions (77%) and the religiously unaffiliated (69%) said the government should take all necessary steps to ensure the public is safe, even if it harms businesses and the economy.

White evangelicals were the only religious group surveyed in which a majority of respondents (61%) said they felt comfortable attending a worship service in person ―something conservative Christian activists have pushed governors to allow. Only 8% of all Americans said they have actually attended a religious service within the past week. White evangelicals were the most likely to have done so ― one in five said they had attended services.

The overwhelming majority of Americans surveyed for the study said they have recently worn face masks or face coverings when they left their homes (86%). Most white evangelicals said they have adopted this practice as well (78%). But they were also more likely than any other religious group to say that they haven’t worn face masks outside (22%).

The Centers for Disease Control and Prevention has recommended that Americans wear cloth face coverings when they go out in public to prevent the spread of COVID-19. But in recent weeks, wearing a face mask has become something of a political statement. Trump has played a role in turning face masks into a culture war issue by refusing to wear masks during public appearances. 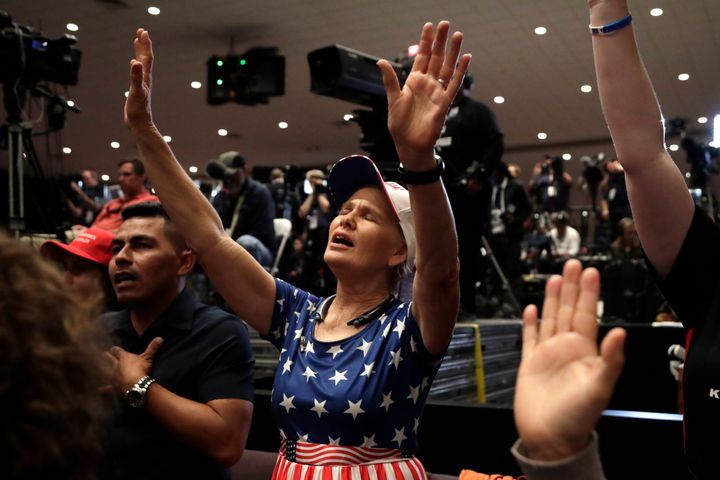 Across the board, most Americans surveyed approved of the way that the CDC has handled the outbreak. But the survey also asked a broader question that gauged how respondents felt about the reliability of scientists in general. White evangelicals revealed a high degree of skepticism.

White evangelicals also stood out among religious groups for having the most positive opinion about the president’s handling of the coronavirus pandemic. A significant number (75%) said that Trump is handling the pandemic well, with a majority saying he’s handling it very well (44%). No other religious group ― including other white Christians ― came close to giving Trump such high marks.

The president downplayed the threat of the virus during the first two months of the year before declaring a national emergency on March 13. He urged governors to end lockdowns in early June, stating that the U.S. was “largely through” the pandemic.

On Friday, Dr. Anthony Fauci, the infectious disease expert advising the Trump administration on its COVID-19 response, warned that infection rates are increasing among young people who could remain asymptomatic while spreading the virus to more vulnerable populations.

The average number of new cases per day has increased by about 60% over the past two weeks, according to The Associated Press. At the same time, COVID-19 deaths have dropped to about 600 per day, compared to about 2,200 in mid-April. 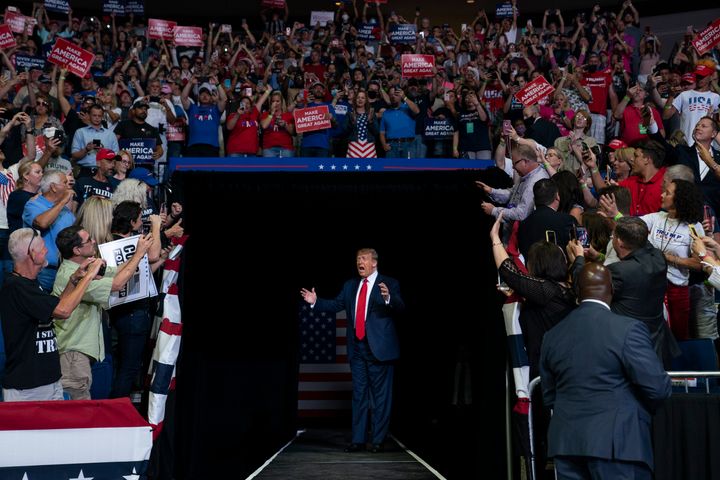 Some of the hardest-hit states ― Texas, Florida, Arizona and Arkansas ― are led by GOP governors who have largely echoed Trump’s calls to prioritize the reopening of the economy.

Cox said he suspected white evangelicals’ attitudes about the pandemic have been partly influenced by their affinity with the Republican Party.

“Rank-and-file Republicans, who have largely been taking their cues from President Trump and other Republican elected officials, are generally less concerned about engaging in a variety of social activities and less likely to believe the pandemic poses a major threat to their families,” he said.

“If Trump and other GOP officials continue to say everything is fine, then I would not expect major shifts in attitudes among evangelicals,” he added.

AEI surveyed 3,504 adults between May 21 and June 5, using a combination of live-caller phone interviews and an online panel run by the National Opinion Research Center at the University of Chicago.