Reports of Antifa being behind protests, lighting of fires in Tacoma, Washington; reaction from chair of the King County Republican Party Joshua Freed.

White House press secretary Jen Psaki on Monday said President Biden condemned violence in Portland and Seattle, saying he supports “peaceful protests,” but that “smashing windows is not protesting and neither is looting,” calling that activity “completely unacceptable.”

Psaki was asked during the White House press briefing Monday for Biden’s reaction to recent unrest in the Pacific Northwest.

“President Biden condemns violence and any violence in the strongest possible terms,” Psaki said. “Peaceful protests are a cornerstone of our democracy but smashing windows is not protesting and neither is looting, and actions like these are totally unacceptable.”

More than a dozen people were arrested in the two cities, according to police reports, after demonstrators angry with Biden targeted government buildings and the Oregon Democratic Party building in Portland.

In Portland, about 150 people marched on the headquarters of the Democratic Party of Oregon and a federal Immigration and Customs Enforcement (ICE) building. 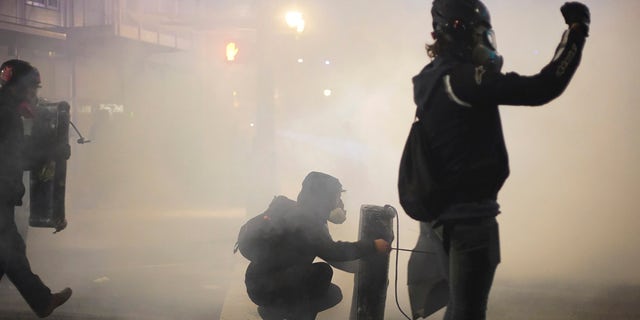 The demonstrators, most clad in black, spray-painted anarchy symbols on buildings, broke windows and marched under a banner that read, “We are ungovernable.”

“We don’t want Biden — we want revenge for police murders, imperialist wars, and fascist massacres,” read another banner that the group marched under.

In Seattle, hours after Biden took office last week, a group of about 100 people marched in the Emerald City, where police said windows were broken at a federal courthouse and officers arrested three people.

Federal law enforcement responded to the unrest over the weekend.

Meanwhile, shifting to the coronavirus pandemic, Psaki announced that President Biden has decided to maintain travel restrictions for the Schengen Area, Northern Ireland and Brazil, and added South Africa to the restriction list.

Psaki said that the Biden administration was tightening up requirements to fly into the U.S. and said any travelers must have proof of negative COVID-19 tests within three days of departing for the U.S.

Psaki was asked about Biden’s comments on the campaign trail in March 2020, calling former President Trump’s move to ban travel from China into the U.S. at the beginning of the coronavirus pandemic “xenophobic,” and how his travel ban would be described.

“I don’t think that is quite a fair articulation. He was clear the Muslim Ban was xenophobic,” Psaki said, pointing to Biden’s move last week to overturn the Trump-era travel ban on mostly Muslim countries. “He supported travel restrictions to ensure the American people are safe.”

She added: “He was critical of the former president for having a policy that was not more comprehensive than just travel restrictions.”

Psaki went on to say that Biden has a “multi-faceted approach,” including vaccinations, and wearing masks for at least the first 100 days of his presidency.

Psaki also announced Monday that coronavirus public health briefings will return three times a week, and will be presented by Biden administration COVID-19 officials and scientists.