A coalition of states is suing to try to break up Facebook – the latest event to call the company's future into question. If Microsoft's antitrust ordeal is at all analogous – over three years from suit to settlement – it could be a long time before the outcome of all this is known. And it could be years more until we see the ultimate impact on Facebook.

For investors in the social media company's stock, the future might look different from the kind of innovation and industry dominance we've seen over the past decade. But it could still turn out well for shareholders if the company's focus shifts more toward optimising its operations for near-term profitability with an emphasis on financial engineering. 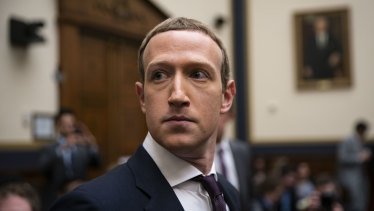 A Facebook breakup would be humiliating for Mark Zuckerberg, but could be lucrative for investors.Credit:Bloomberg

Despite its enviable growth rate and online advertising duopoly with Alphabet's Google, Facebook's stock has a relatively pedestrian valuation. While there's considerable uncertainty about how economic growth will play out next year, Facebook shares are valued at around 24.5 times adjusted earnings estimated for 2021, compared with the S&P 500 as a whole trading at 21 or 22 times 2021 earnings estimates. Facebook's multiple is lower than companies like Walmart or Coca-Cola, perhaps suggesting that a fair amount of regulatory risk is already built into the stock.

Of the various possible outcomes of Facebook's antitrust challenges, one might be that it remains a company whose core advertising business is secure, while its ability to encroach on emerging fields is limited. That's arguably what happened with Microsoft, which famously missed out on the internet, social media and smartphones in the 2000s while its core cash cows of Windows and Office remained intact.

Despite being sidelined during all that innovation, Microsoft's revenues grew from $US15.3 billion ($20.3 billion) in 1998 to $US60.4 billion in 2008. In the same way, a less innovative Facebook is still likely to reap years of revenue growth from riding the secular trend in digital advertising growth.

So while a breakup of the company – however likely that might be – would be humiliating for chief executive officer Mark Zuckerberg and strip him of power, it could be a value-creating event for shareholders similar to the split of eBay and PayPal.

Facebook shareholders would get shares in the separated entities: the main social network referred to as Facebook Blue, as well as Instagram and/or Whatsapp. Blue could be to Facebook what eBay's marketplace business was to eBay, a slow-growth business that generates a lot of profit.

Blue is also the business line that gets the company in the most trouble with respect to political and controversial content. If it were split off from the rest of the company, it could institute a dividend and focus on cash generation and stock buybacks. With interest rates as low as they are, the company could even borrow tens of billions of dollars at cheap interest rates to opportunistically buy back more shares, similar to what Apple has done in recent years.

Meanwhile, growth-centric investors could get access to faster-growing, undermonetised Instagram and Whatsapp without the messiness of Facebook Blue. Both companies seem on the verge of doing a better job of generating revenue from their platforms, with Whatsapp showing particular promise in countries like India. And as the businesses mature, they, too, could get into the dividend and buyback game.

Facebook doesn't need any more world-changing innovations for its stock to work for investors. While emerging platforms like TikTok and Snapchat are growing ad revenue, and Amazon has developed a multibillion-dollar ad platform, there's no evidence that Facebook is in any danger of seeing its network fade away anytime soon.

If innovation-focused investors get skittish about antitrust risks and dump Facebook's stock, value investors should be there to pick it up, with the investment case tied more to returning capital to shareholders than taking over the world. That's the kind of win both Wall Street and Washington could get behind.

The US produces just 12% of the world's computer chip supply. Here's why it's trailing China when it comes to manufacturing and how it plans to get ahead.