Trump legal adviser Jenna Ellis asks why Twitter should have liability protections, arguing that it inserts political bias onto its platform.

Google's YouTube is allowing a video tribute to George Floyd from the Trump re-election campaign to remain on its platform despite rival Twitter's removal of a similar post for reported copyright violations.

The protected material wasn't present in the footage posted on YouTube when the site reviewed it, a spokesperson told FOX Business. A Twitter spokesperson told FOX Business previously that it disabled the tribute video from the @TeamTrump account in accordance with a copyright policy that requires the tech giant to "respond to valid copyright complaints sent to us by a copyright owner or their authorized representatives."

YouTube's policy is similar. The three minute and 45-second clip is a montage of photos and videos of peaceful marches after the death of Floyd, a black man who was being detained by Minneapolis police. It shows police officers hugging protesters along with scenes of burning buildings and vandalism during demonstrations that sometimes turned violent.

It's accompanied by gentle piano music and a spoken message from Trump.

The Trump campaign didn't immediately respond to an inquiry as to why it didn't upload the same video to Twitter that it did to YouTube.

Team Trump's Twitter account did, however, respond to the social media company's decision to remove the video on Friday, saying the company is "censoring this uplifting and unifying message from President Trump after the #GeorgeFloyd tragedy. The same speech the media refused to cover."

The president also accused Twitter of "fighting hard for the Radical Left Democrats" in a Friday tweet that linked to an article about the tech giant's decision to remove the video, calling it "a one-sided battle" and "illegal." 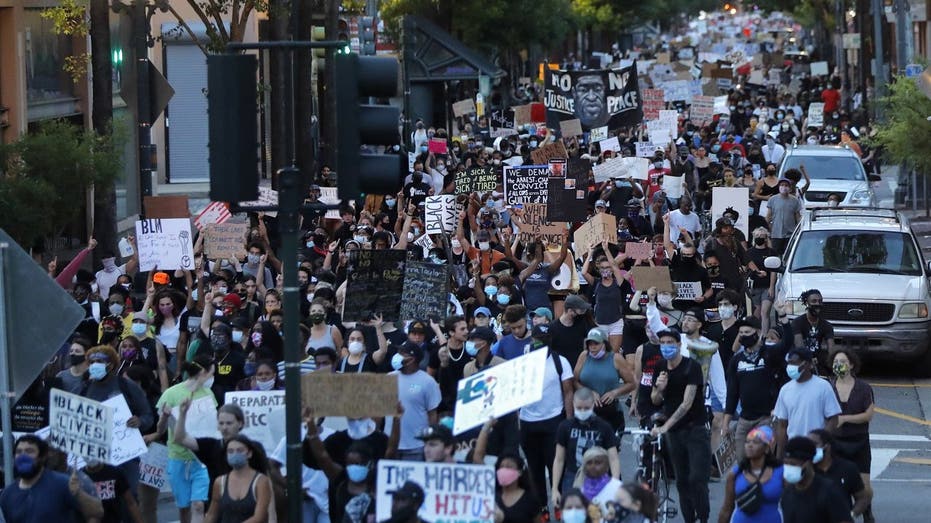 People march through the streets of New Orleans on Wednesday, June 3, during a protest over the death of George Floyd. (AP Photo/Gerald Herbert)

Twitter CEO Jack Dorsey weighed in, saying Trump's claims were "not true" and the move was "not illegal."

Under those tweets, there is now a link reading “Get the facts about mail-in ballots” that guides users to a Twitter page with fact checks and news stories about Trump’s unsubstantiated claims.

It also demoted and placed a stronger warning on a third Trump tweet about Minneapolis protests that read, in part, “when the looting starts, the shooting starts.” Twitter said that the tweet had violated the platform’s rules by glorifying violence.

Trump responded by signing an executive order on May 28 that seeks to remove liability protections for social media platforms that engage in political behavior, with guidance from the Federal Communications Commission.

The order has already been challenged in court, and Trump's ability to stop recognizing the protections without Congressional approval is unclear. They were enacted into law in Section 230 of the Communications Decency Act by lawmakers in the late 1990s.

While the president and other Republicans have complained about anti-conservative bias in moderation of social media posts, lawyers say that corporations have the same First Amendment rights as individuals, a position the Supreme Court upheld in the Citizens United ruling in 2010.