Australian winemakers are staying positive on the prospects of selling their drops into growing markets such as Thailand and Vietnam after the Chinese market was declared "non-viable" owing to hefty tariffs being slapped on imports. 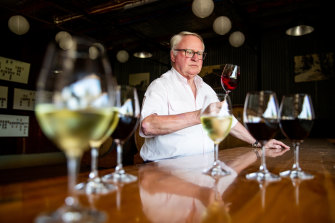 "Our prices on a wine list in Beijing will go up by a factor of four. If it sells for $20 a bottle, it's just gone to $80," he said. "So it's now not a viable market for Australia under those conditions."

"There's not much we can do about it, we've just got to go and find some new markets."

Australia exported more than $1.2 billion worth of wine to China in the 12 months to the end of September, accounting for about 35 per cent of the country's total wine exports. Demand has been boosted in recent years by China's growing middle class and their appetite for fine Australian wine.

Tariffs imposed by China's Commerce Ministry, following the preliminary findings of an anti-dumping investigation, has forced winemakers to pivot almost overnight, with major sellers such as Penfolds maker Treasury Wines eyeing off the growing Taiwanese, Vietnamese and Thai markets.

Data from global statistics firm Euromonitor shows wine consumption in those markets has been steadily growing over the past five years. Since 2014, the total value of wine consumed in Thailand has jumped 74 per cent to $US1.35 billion ($1.8 billion). Similarly, the markets in Vietnam and Taiwan have grown to be worth more than half a billion dollars.

Mr Tyrrell is bullish some of these markets will be able to compensate for the 10 per cent of sales he's set to lose due to Chinese import restrictions, noting there's still plenty of possible growth and, hopefully, an appetite for Australian vintages.

"In those countries, we're also going to have less competition from Europe," he said. "The Europeans right now think the Chinese government's the best government in the world because this allows them to get some of the market back from Australia."

But while increasing sales into those Asian regions may match the lost revenue from China, Mr Tyrrell isn't expecting them to be as profitable. Euromonitor analyst Alejandra Cornelio agrees, saying many wine drinkers in these markets opt for cheaper drops and may need to be convinced to buy Australian wine.

"Some of these Asian countries hold a level of patriotism and support local brands, [and] consumers are more price-driven than Australian wine drinkers," she said.

Christina Tulloch, chief executive of Tulloch Wines, notes her vineyard is in a more favourable position than others with just 5 per cent of its sales being exported, but acknowledges the tariffs will have a "massive negative impact" on the local industry. Striking up business in new Asian markets will be slow-going, she believes.

"It'll take a while for it to be a feasible option, and I don't know if there is as much appetite in some of those economies for Australian wine compared to what we saw in China," she said.

"The thirst for luxury wine was also really big in China, and I think there's a lot of development that needs to be done in those other markets before we see that."

Treasury Wines boss Tim Ford has previously warned the punitive measures from China would ripple across the Australian winemaking industry, but the company is remaining sanguine it will be able to weather the storm.

"The provisional measure announced by MOFCOM means that demand for Treasury Wine Estates’ portfolio in China will be extremely limited, and there is no one market that can quickly and easily replace the demand in China," a company spokeswoman said.

"We see this as a forced reset, but we’re not coming from a standing start, and we will come through this a stronger and more diverse business."