One of the Wisconsin state Supreme Court justices who blocked an extension of the governor’s stay-at-home order on Wednesday falsely compared the COVID-19 safety measure to the U.S. government’s incarceration of more than 100,000 Japanese Americans during World War II.

Justice Rebecca Bradley, appointed by former Wisconsin Gov. Scott Walker (R), cited the widely condemned 1944 U.S. Supreme Court ruling in Korematsu v. U.S., which at the time upheld forcing Japanese Americans into concentration camps and rejected that it was based on racial prejudice.

Bradley suggested the stay-at-home order enacted by Gov. Tony Evers (D) was a similar example of government overreach that “may lead to extraordinary abuses of its citizens.”

“The point of citing them is not to draw comparisons between the circumstances of people horrifically interned by their government during a war and those of people subjected to isolation orders during a pandemic,” she wrote. “We mention cases like Korematsu in order to test the limits of government authority, to remind the state that urging courts to approve the exercise of extraordinary power during times of emergency may lead to extraordinary abuses of its citizens.”

Unlike COVID-19 restrictions designed to protect public health, the incarceration of Japanese Americans during World War II was based on racism, xenophobia and false assumptions. After Japan attacked Pearl Harbor in 1941, Japanese Americans were falsely accused of harboring loyalties for Japan or being spies. President Franklin D. Roosevelt then ordered the mass removal and detention of more than 100,000 Japanese Americans, often separating families — part of a long, racist history of Asian Americans having their Americanness challenged.

Bradley’s concurring opinion was part of a decision by the court’s Republican-appointed justices to strike down Evers’ extension of the stay-at-home order, in a legal challenge brought by the state’s GOP-majority Legislature. 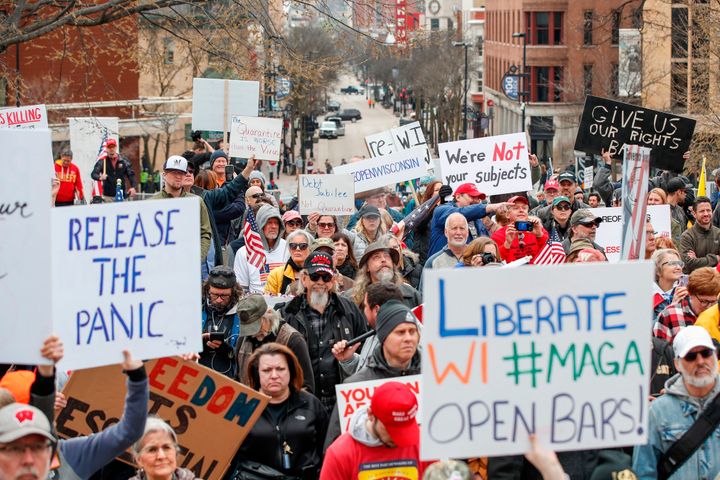 Public health officials have warned against lifting these restrictions too early, as COVID-19 cases continue to rise in many parts of the country and the virus is far from contained. But conservative opponents of the stay-at-home orders in multiple states have led protests against the measures, with some comparing themselves to civil rights activists and claiming their rights have been infringed upon.

Densho, an organization that works to preserve the history of Japanese Americans’ incarceration during World War II, rejected the false comparisons to those concentration camps in a statement on April 30:

We can’t believe this actually needs to be said, but … staying home during a global pandemic is not the same thing as being incarcerated and stripped of basic civil rights. Your living room is not a concentration camp, and exposing service providers to hazardous working conditions so you can get a haircut is not an inalienable right. Your sense of entitlement and lack of any lived or historical knowledge of real systemic oppression makes you a whiny, privileged brat who can’t distinguish between inconvenience and state violence — not a freedom fighter. Sit down, stay home, and stop calling yourself a modern day Fred Korematsu or Rosa Parks.